We are excited to announce our new, May 2022, release reintroducing our upgraded Appery.io Tester app, with a brand new feature, Live Debug. We’re confident our Appery.io community is going to love it! First thing first – our Appery.io Mobile Testing Tool: This smart and handy testing app is live again and available for download from […]
Read more

How Events & Scripts Work with InAppBrowser in Appery.io

Below is a practical solution on how we can use customer external sites in Appery.io apps where events & scripts are defined with InAppBrowser Cordova plug-in. Let’s say your client has a mobile site with lots of pages and different features, but lacks some mobile features like push notifications and he decides to give Appery.io […]
Read more

The spring of 2022 is very special for all of us and we, at Appery.io, would like to make this spring release (rolled out last weekend) enjoyable for all of you as well. With this mission in heart, we are excited to offer you some very special improvements to our Visual App Builder that we […]
Read more
Want to develop mobile apps, but don’t know how?

With the proliferation of mobile devices and increased demand for mobile apps in the enterprise, many developers have switched their interests to mobile development. Even those who are not familiar with the craft of mobile development have considered or tried to create a mobile app at some point. But to be perfectly honest, mobile development is challenging. If it was easy, everyone would be building apps and experienced developers wouldn’t enjoy such high demand. In reality, you need to have pretty strong background using technologies such as HTML, JavaScript, and CSS to build even the simplest mobile app. This is not even considering the various frameworks you would need to learn, on top of everything else.

If you are not a traditional developer but want to a build a mobile app, you have to follow a challenging routine of learning endless set of information, libraries, frameworks and other tools. Of course, such an approach gives your more low-level control over your code, but the chance that you will lose interest before you build something is rather high.

That’s where Appery.io comes to the rescue.  We’ve built a platform with visual app builder and a set of ready-to-use components, pre-installed themes and swatches and a convenient way to use REST services. This approach shortens the learning curve significantly and increases overall developer productivity.  Here is how the Appery.io visual app builder looks:

Even though you have full access to the app source, we’re not showing it to you to demonstrate that the visual approach in Appery.io greatly simplifies mobile app development. By using intuitive drag and drop controls, you can place components on the page- be it a button, a list, or a Google Maps component. With the Properties panel (on the right) you can control component settings: its padding and margins, text values, size or whatever else.

To build the app pages, navigation and basic customization — you probably don’t need to have any programming experience.

When you’re done, you can quickly publish the app as an HTML5 mobile app, or package the app for one of the native platforms: iOS, Android, or a Windows Phone and even integrate with the native APIs such as camera and GPS. Now, that’s pretty impressive.

It’s important to mention that you can write any custom JavaScript, HTML, CSS, or import 3rd party libraries to customize the app as much as you need. This of course requires more development experience. But what’s important is that you are not limited!

Every app needs a backend

It’s not a secret that almost all modern mobile apps require a backend. A backend can help you to keep important app logic. Lets say your app is installed on 1,000 devices and you decide to update some app logic. How do you make sure all the apps are updated instantly? A mobile backend can help here: you change the code in one place – and all the devices instantly talk to the new code (logic) without having to redistribute your app (as illustrated below): 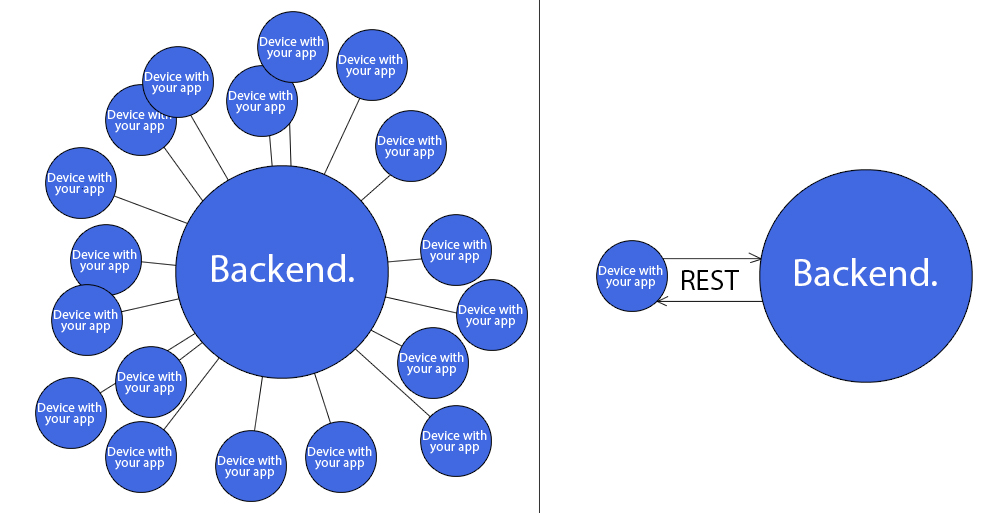 A mobile backend provides additional benefits such as a database and push notification capabilities. The Appery.io integrated backend services provide a cloud database for storing app data, push notifications, and server code for writing any custom app logic on the server using JavaScript. What’s important is that these services are integrated with the App Builder and are available out-of-the-box.

In addition to integrated backend services, Appery.io makes it very easy to use any 3rd party REST API service available on the Internet. With its visual binding editor, you can quickly map REST services to the UI (pages). 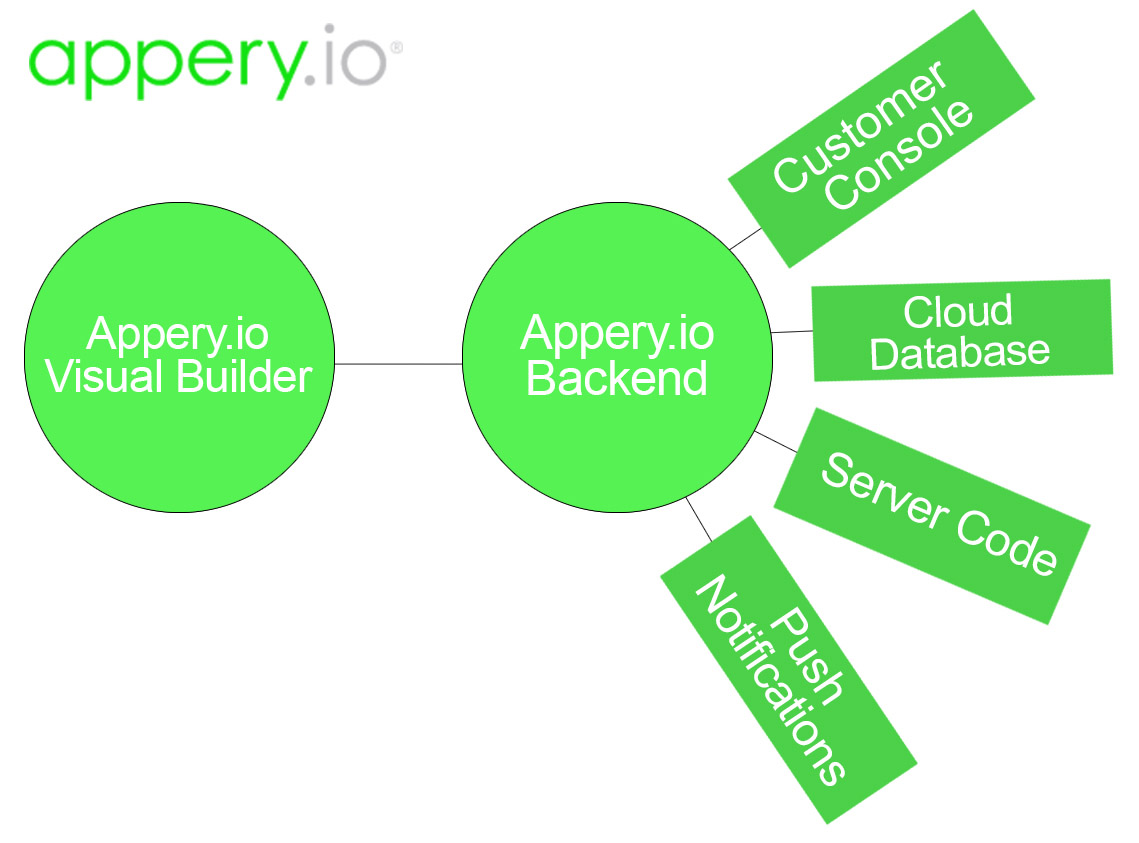 Okay, so you’ve built and tested the app in the browser. What’s next? By using Apache Cordova (PhoneGap) Appery.io gives you the option to package the app for native platforms. The Appery.io cloud build supports .apk (Android), .ipa (iOS) or .xap (Windows Phone) packaging. Go ahead, build something, and launch it on the real device! In addition to packing the app for native, you also get access to device APIs such as GPS, Camera, Contacts and many more (all APIs supported by PhoneGap). You can also test all of your apps without creating binaries using the Appery.io Tester app, available in the app stores.

As you can see, Appery.io really simplifies building mobile apps. It can serve as your ticket to the world of  mobile development and our support team will make this journey even easier. We recommend beginning with our getting started tutorials.