How to Read CSV Files in Your Application | Appery.io

From now on, you can read CSV files and display their content on both web and mobile applications created in Appery.io. Watch our new tutorial to learn more about the CSV Reader plug-in that does all the work for you.
Read more

How to Redirect Your App to HTTPS | Appery.io

If you need a secure application with an HTTPS-only protocol, then you’re in the right spot. Check out our new video and learn how to redirect your application from an HTTP to HTTPS protocol by installing the HttpToHttps plug-in from the Appery.io development team.
Read more

April 1st is Easter this year on the Western Christian calendar and April Fools’ Day in many countries, but it’s also the day we roll out another release of the Appery.io mobile app platfom. Here are some of the “Easter eggs” you’ll find in this release.

In Appery.io Builder you can create not only mobile apps but web apps too. You can easily publish them on our domain, but you might prefer to publish them on your own server. Before, this required advanced IT knowledge, but now it’s getting easier to upload your app to your custom domain because we’ve added the ability to upload SSL certificates directly in the Builder.

Most of our users send push notifications in their apps. And since this release, we support the new version of the push plug-in with more advanced features!

Detailed documentation and examples will be available once we’ve rolled out this release.

New features for iOS appear all the time. It’s great when they become available, but then Apple requires them to be in the apps uploaded to the AppStore. The launch image set, also known as splash screens, supported by the Appery.io platform has become outdated. So, in this release, we have introduced a new approach called launch storyboard images. You should get fewer issues with uploading your app to the AppStore, which is where they should be!

Now you can get more information about your plan (Server Code Script Execution Interval, Burst Rate API, etc.) on your Account tab. Just click on the information button near your plan! 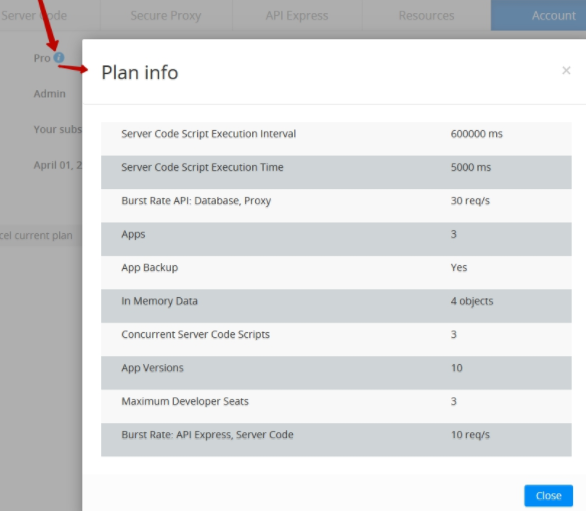 The is a new feature for our API Express! Now our users can create a database connection and specify only username, password, and JDBC URL. It’s a very useful option, for example, in some cases where you need to create a connection with an Oracle database. You will find out more in our documentation as soon as we roll out the release.

New Cordova libraries require only .png images for the splash screen, so we have added this ability to avoid this issue.

Bugs (Less of Them)

No update is complete without bug fixes. So, yes, we fixed a great number of large and small bugs to make the platform better.