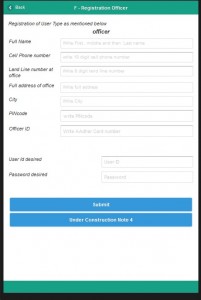 Located in Maharashtra, India, the Bharatiya Mahila Federation (Thane Samiti) [Thane District Chapter] is an Indian charity dedicated to improving the lives of Indian women. They are an affiliate of one of the oldest Indian women’s organizations, the National Federation of Indian Women (NFIW).

The organization helps women and children in a multitude of ways, from running family counseling centers to putting on street plays to highlight women’s struggles against poverty and violence.

The organization needed to solve a dire social problem: Many Indian cities have a large percentage of their population living in crowded and congested housing without individual bathroom facilities. The people living in these conditions rely on poorly maintained community facilities, which are usually built by local governmental authorities.

The people who use the facilities cannot afford to spend hours or days navigating the bureaucracy to file a complaint about the conditions and manage repair requests. Further, the complaint resolution process is complicated, with little accountability.

The organization decided that there must be a better way to file complaints and request maintenance: a mobile app. Cell phones are widely used in India, with about 75% to 80% of the population using them. The rationale is that even amog poorer populations, some people in these areas will have smart phones, which can be used to file and monitor complaints.

The organization designated Appery.io as the platform they’d use to build their app, which they will offer to the affected municipalities. The app will have four modules: a citizen module, a municipal officer module, a contractor module, and an initial facility survey module.

The goal, according to Dr. D.G. Mahajan, a volunteer with the organization, and creator of the app, is to facilitate repair and maintenance of the facilities.

After investigating the best methods to build the app, Dr. Mahajan decided to go with Appery.io. He cites a number of reasons for his choice:

Further, Dr. Mahajan says, the platform’s learning curve is short, and the platform itself is flexible, giving developers the ability to build an app via a visual editor and edit the source code.

Over 42,500 people are projected to use the app to file and manage complaints in Mumbai alone. If the app is successful, the organization plans to expand its reach into other Indian cities.

According to Dr. Mahajan, the success of this app will mean improvement in the lives of tens of thousands of people: “If we are successful in reducing the number of unusable facilities due to maintenance issues, then that is a benefit to people living in low-cost areas.”