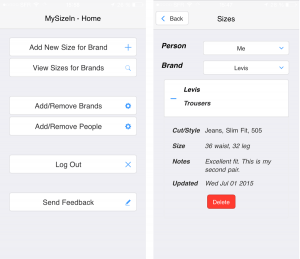 Shaun Summers is a developer who leveraged the Appery.io platform to build an attractive and functional app. A B2B Marketing Director by day and “a technophile by night,” Summers designed an app to help people collect information about their clothing size in order to simplify clothing shopping.

The app is aimed at busy people that like clothes but have little time to go shopping and/or find little pleasure in the process of trying them on. The idea is to allow these individuals to accumulate some knowledge of their sizes for different brands so that they may confidently buy without trying the item on in the future.

Summers tried a few different platforms to build the app, but many were quickly rejected as they were simply for creating mobile web sites. After an initial round of reviews, he focused on Mobincube, MIT App Inventor and Appery.

Summers decided to go with Appery.io because “from the first few clicks, Appery.io was intuitive.” According to him, the ease of integration with the database was a key selling point, but the strongest selling point was the availability of the Appery team via the help forum.

Another key factor for Summers was the pricing; the platform is very accessible to individuals and allows you to get started right away without making a huge investment.

Summers describes Appery.io’s GUI as “nice and intuitive,” and says that “combined with the detailed tutorials, it is very easy to get up and running quickly.”

Summers hopes to establish a base of users with identifiable preferences, while the second stage would be to develop a range of services for this group that would help them further with the clothes buying process. Aiming for a few hundred users before the end of this year, Summers plans to gradually grow the user base throughout 2016.

As Summers mentioned, we have dozens of detailed tutorials to make creating apps with Appery.io even easier. Make sure to check them out, as well as our “Getting Started” page, where you’ll find everything you need to start building an app today!