We are excited to announce our new, May 2022, release reintroducing our upgraded Appery.io Tester app, with a brand new feature, Live Debug. We’re confident our Appery.io community is going to love it! First thing first – our Appery.io Mobile Testing Tool: This smart and handy testing app is live again and available for download from […]
Read more

How Events & Scripts Work with InAppBrowser in Appery.io

Below is a practical solution on how we can use customer external sites in Appery.io apps where events & scripts are defined with InAppBrowser Cordova plug-in. Let’s say your client has a mobile site with lots of pages and different features, but lacks some mobile features like push notifications and he decides to give Appery.io […]
Read more

The spring of 2022 is very special for all of us and we, at Appery.io, would like to make this spring release (rolled out last weekend) enjoyable for all of you as well. With this mission in heart, we are excited to offer you some very special improvements to our Visual App Builder that we […]
Read more

As many of you know, we formally launched Appery.io at the TechCrunch Disrupt hackathon in New York. We came back from it super stoked about Appery.io and just wanted to share some of our excitement from the event.

Appery.io was the product most widely adopted by developers at the Hackathon! More than 30 teams completed and submitted their projects, and many of them won prizes!  This is a TechCrunch record. A distant second was TechCrunch itself — who was promoting its CrunchBase API — with 15 teams.

This was TechCrunch’s largest Hackathon to date with over 1,100 developers.  Check out the scene in the picture below.

And the Winners Are…

Congratulations to the Bar Power (1st), Career Hound (2nd), and Waterlog (3rd) teams for winning prizes in our contest!  We were impressed with the innovation and quality of all the projects built in Appery.io — other Appery.io projects won prizes from other  sponsors as well, including prizes from Visa and AT&T! 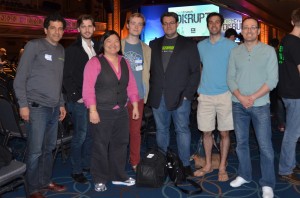 Team Bar Power and Team Waterlog with Max and Francisco 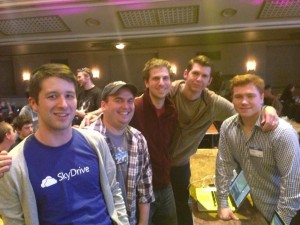 Tons of developers continued their hacks through the night fueled by the sheer excitement of the event and lots of caffeine! There were so many teams developing on Appery.io that we decided to not sleep that night, so we could provide developers all the help they needed. We had a team of three onsite plus a remote team providing support via Skype. Our support table was the most popular by far, with lines throughout the night. 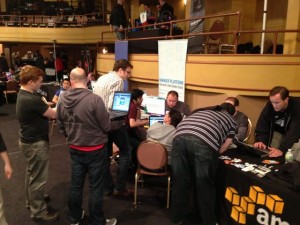 The Most Popular Table: Ours

We were humbled as 30 teams presented their Appery.io projects on stage to a crowd of over 1,000 influencers. Many thanks to all the developers and designers who participated. We are looking forward to seeing many of your projects turn into real businesses!

You can watch a few of the presentations on our YouTube channel using this playlist.  Also, check out more pictures and buzz from the event on Storify.